One minute you're tutoring maths students, the next you're playing for Los Angeles Lakers in front of Magic Johnson, Will Ferrell and Nicki Minaj.

It's fair to say it has been something of a whirlwind week for 32-year-old Andre Ingram, who finally made his NBA debut after more than 10 years and 384 matches of trying when he lined up against Houston Rockets on Tuesday.

And while his team might have fallen to a 105-99 defeat, Ingram still had plenty to smile about.

After all, he is 384 games into a career which, until now, had been mostly spent in the G-League, the NBA's minor league.

The rookie, who has been signed by the LA Lakers for the final two games of the season, scored 19 points and his performance caught the eye of NBA legend Kobe Bryant.

"A lot of people that try and live the basketball dream probably would have given in, with the amount of years he has been trying," said Lakers head coach Luke Walton.

"You do not make lot of money in the minor league system, playing crazy schedules, in small towns, constantly waiting for others to think you are good enough. That can get mentally tough.

"It shows how mentally strong he is, how much he believes in himself and how much he loves the game."

Ingram said: "I just felt some electricity out there. It was amazing. The crowd, the lights — it was once in a lifetime."

His debut came a day after he was surprised by former player and Lakers president Johnson, who gave Ingram a contract until the end of the season.

Suddenly Ingram, a part-time maths tutor with a degree in physics, went from playing in front of a couple of hundred fans to the 20,000-seater Staples Center in LA.

Against the Rockets, he was up against some of the NBA's best players in Chris Paul and James Harden.

After the game, nine-time All Star and two-time Olympic gold medallist Paul, 32, said: "I told him much respect. Ten years grinding in the G League, finally getting an opportunity and to play like that - that's pretty special."

"This was not just doing a nice thing," said Walton. "We were bringing him up because we thought he could help us, we got bodies down [injuries] and he can shoot the ball.

"It was for us as much as for him and on national TV he showed the world what kind of shooter he is. For being in the bright lights he was pretty good tonight and it was fun to watch." 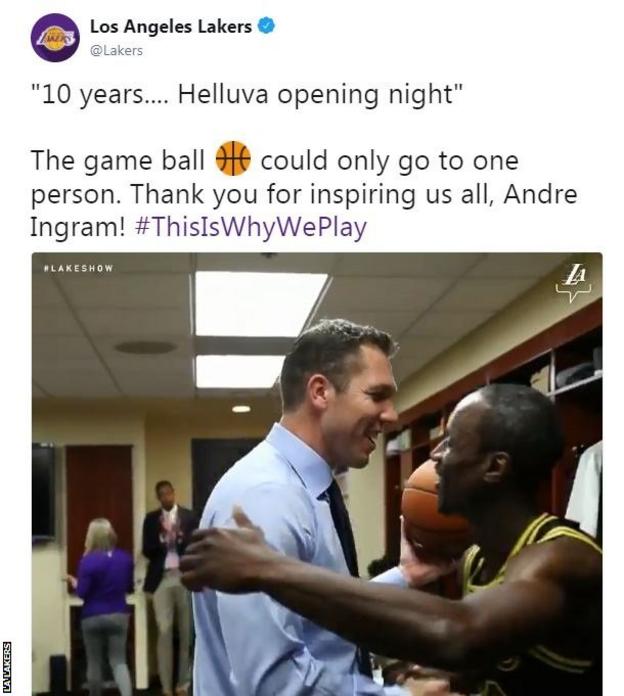