Guard Andrew Lawrence and forward Gabe Olaseni led GB with 15 points each on an off-night for leading scorer Dan Clark, who hit only three of 14 shots.

Great Britain are bottom of their six-team group with three games left to play.

Only the top four teams advance to the knockout phase. 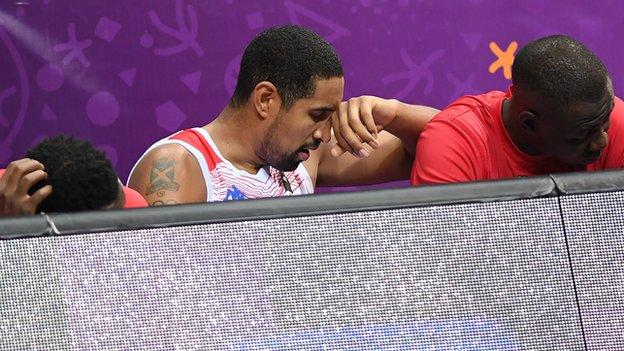 After the previous day's defeat against Belgium, GB needed to make an early impact in front of a hostile crowd and they held a 16-10 lead late in the first quarter.

When they lost that advantage it was for good with Turkey establishing a 10-point advantage in the second quarter on the way to a 49-36 interval lead.

Great Britain's cause was not helped by being charged a second timeout by the officials in the third quarter - their offence being to take too long in the previous one.

That seemed to sting the team into action - they reduced the lead to single figures on a Ben Mockford three-pointer (50-59) and closed to within five points early in the final period.

With 4:44 remaining of the game, a Clark three-pointer made the score 75-68 and GB seemed ready for a final push.

That proved to be their last score for more than four minutes and, although Turkey added only nine points themselves, Olaseni's two free throws came too late for Great Britain.

Great Britain now have a rest day before taking on Latvia in a game they will probably need to win on Monday.

"I thought for the majority of the game we had a lot of good ball movement," said Lawrence. "Also we made a lot of open shots, which we unfortunately didn't knock down."

Head coach Joe Prunty added: "I'm going to take a look at our second-half defence, which was very good. We held them to 30 points and that's a big improvement."