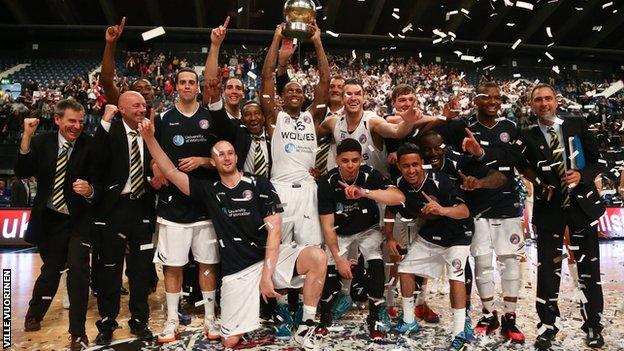 Championship winners Newcastle were looking for a double, but could not handle the league's Most Valuable Player, who top-scored with 30 points.

Will Creekmore's 12 points had helped the Wolves to a 48-42 half-time lead.

And despite Darius Defoe's 22 for Eagles, Worcester - who finished the season third - held on to win.

It capped a memorable season for Paul James's side, after winning their maiden honour in March by beating Glasgow in the BBL Trophy final.

But there was fresh disappointment for Fab Flournoy's Newcastle, who lost their second consecutive play-off final.

Wolves, appearing in the final for the first time, settled into their rhythm quicker and began to pull away midway through a high-intensity opening period, with guard Taylor scoring seven points and running his side's plays to give them a 29-15 lead at the end of the first quarter.

Eagles centre Defoe, influential at both ends, helped to drag his side back to within one in the second period with some fine under-pressure shooting to take him to 16 first-half points.

But Taylor hit a brilliant three-point buzzer-beater to take the Wolves into half-time six points ahead and the Wolves came out for the second half in the same style as the first.

A stunning scoring run, including three straight fast-play baskets from Taylor, saw them finish the quarter with a 72-52 lead.

Two straight three-pointers from Eagles captain Charles Smith brought his side to within nine points in the final period and set up what could have proved to be a tense finale.

However, the Wolves once more showed their quality and the relief was clear to see on their players' faces at the buzzer.

"Back in the summer when I signed all these guys, all we wanted to do was win. We said we wanted to win two things this year - and that's what's happened.

"We looked at Newcastle and felt we have to do something different. We went from man-to-man to zone-to-zone to throw them off, and the start proved that.

"After you miss one or two shots you start to get a little tight, and I thought we rebounded well."

"I think their offence play really hurt us. With all guys able to shoot the three, it was really hard."

On his future: "In all honesty I haven't given that any thought. I will start to think about that on Tuesday.

"On Monday I have to deal with the repercussions of this season. After that, I will re-evaluate my situation just like I re-evaluate every player in my team. I don't want any knee-jerk reactions."