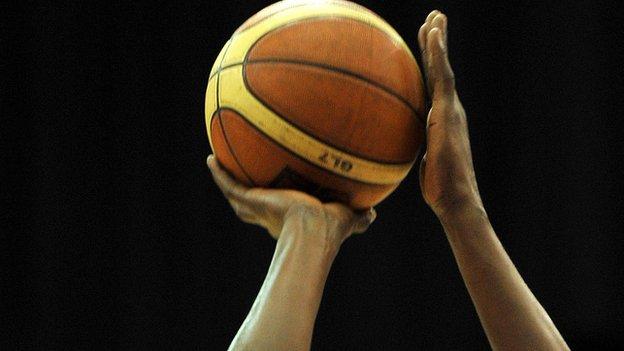 Manchester Giants coach Jeff Jones says it is "quite an achievement" to reach the play-offs two years after returning to the British Basketball League.

The Giants folded in 2001 for financial reasons but were relaunched in 2012.

They improved on a ninth-placed finish last term to end the regular season seventh and will face Sheffield Sharks in a two-legged quarter-final.

"To get it [into the play-offs] in the second year of our existence is quite an achievement," said Jones.

We're in a pretty good position, from the point of view of moving the club forward and looking at the sustainable model of running a sports club in Manchester that isn't football

He told BBC Radio Manchester: "The players have done a great job.

"It's going to be extremely difficult against Sheffield because they're a well-established franchise. It's going to be tough, but for the last two months we've probably been the second best team as far as results go, so we've stepped up and played well. We're looking forward to it."

Jones's side will be at home in Saturday's first leg and will hope to take an advantage into the second game in Sheffield on Sunday.

Whatever the outcome, the Giants are happy with the progress they are making.

"The fans, old and new, have come back to the game," continued Jones. "We're in a pretty good position, from the point of view of moving the club forward and looking at the sustainable model of running a sports club in Manchester that isn't football.

"It's a tough sell but the fans have been fantastic, the players have responded to it well and our home form has been good.

"We get the home leg first so hopefully we can take a lead over to Sheffield and maybe surprise a few people."