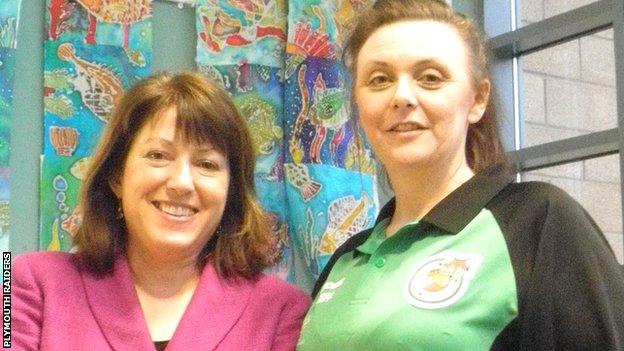 Plymouth Raiders have announced plans for a women's team to compete in the National League for the first time since 2008.

The Raiders aim to have a team in place for the start of the 2014 season, although 2015 is also a possibility.

The club are launching a partnership with Notre Dame School to run an elite girls' basketball academy, which they hope will feed into the women's team.

Carys Hall, who helps coach England's Under-15 side, will lead the academy.

The potential here is massive

"I moved down here from Bromsgrove to help Raiders develop female basketball in the city again," said Hall.

"I've got a lot of experience of starting a club from nothing, developing it to become a National League club and coaching some top young players in the West Midlands, so I can't wait to get started. The potential here is massive."

The Raiders last competed in the women's National League in the 2007-08 season, finishing fourth in the old Division Two Women Midlands/South West league.

Chief executive Dave Briggs added: "Everyone at Notre Dame was really impressed with what we have achieved at Ivybridge Community College and Discovery College with our men's academy programmes, and were eager to help us get a girls' academy off the ground.

"Headteacher Kate White has been instrumental in getting this started, and huge credit must go to her and her staff for sorting this all out so quickly. The academy at the school will start in September 2014, and we will be recruiting players from all over the UK and Europe."