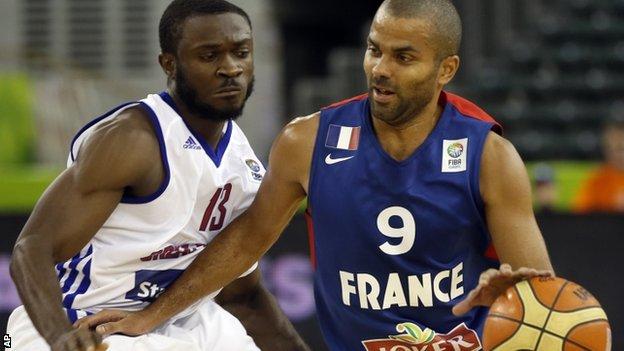 Great Britain were beaten in their second game at EuroBasket as a Tony Parker-led France claimed an 88-65 victory in Slovenia.

France's Nicolas Batum top scored in the Group A clash with 17 points.

But it was San Antonio Spurs point guard Parker who dominated, his 16 points and five assists helping France to their first win of the tournament.

Britain, who beat Israel 75-71 in their first game, must finish in the top six to get next year's Olympic funding.

Joe Prunty's men came into the match in confident mood after coming from behind to beat Israel in overtime on Wednesday.

And despite Portland Trail Blazers' Batum getting France off to a good start, Britain were still within eight points at half-time after a strong second period.

Dan Clark, who finished with 16 points, was keeping Britain in the game along with Devon Van Oostrum, but nine unanswered points early in the second half put France in total control.

Parker picked out passes at will while Batum continued to score heavily as France, who lost their first game to Germany, comfortably saw out the game.

Britain, who must finish in the top three in the group to reach the second round, slipped to fifth in the table ahead of Friday's game against Belgium.