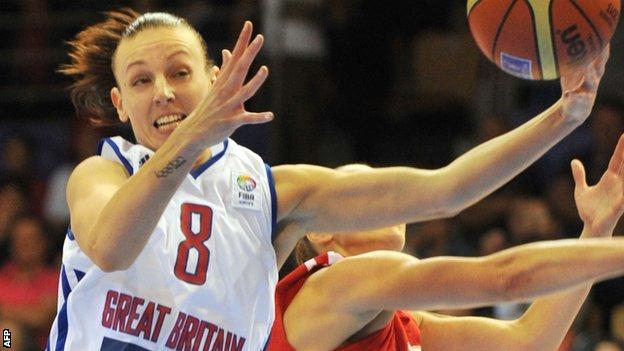 Great Britain women's head coach Damian Jennings has pleaded with UK Sport not to remove their funding after failing to make the final eight at EuroBasket.

After initially losing all financial support for the 2016 Olympics, GB won a reprieve in February, but must keep improving to maintain funding.

GB beat Croatia 85-79 but just missed out on the quarter-finals.

"To fall short only on maths because of other teams' results shows we're making real progress," said Jennings.

"I hope the people who fund us recognise where British basketball is going."

GB finished fifth in Group F, tied on seven points with the Czech Republic, who progressed to the next phase along with France, Serbia and Belarus.

Britain missed out on the last eight because of their inferior head-to-head record against the Czechs following the 66-55 defeat on Thursday.

At present, GB Basketball is set to receive £7m, spread over four years and shared between the men's and women's teams.

One player who may not feature for Great Britain again is power-forward Kimberly Butler, who turns 31 in September and admitted that the team's next competitive fixtures - which are not until late 2014 - may be too far away for her.

"I guess we took it personally when we didn't get funding initially and a few players considered not coming along to EuroBasket, so we had a lot to prove and hopefully we did that," said Butler.

"We didn't qualify for the next round, but we've come out with the win at the end and I think we made history. Hopefully now GB will be respected."

UK Sport will reveal its assessment of how each of the funded Olympic and Paralympic sports are performing in a briefing at the end of this week, but GB Basketball does not expect to learn its fate until the men's team have competed in their EuroBasket competition in Slovenia in September.