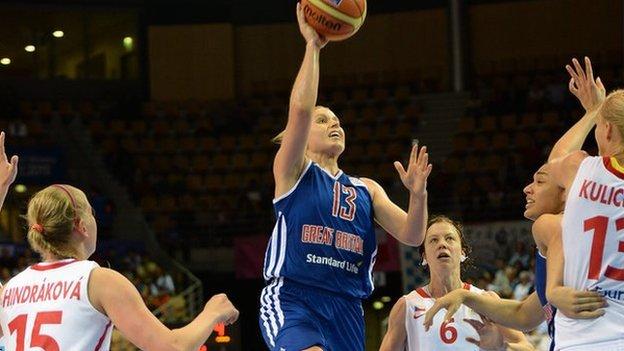 Great Britain's women fell away in the last seven minutes to lose 71-61 to Belarus in their second match in the EuroBasket second phase.

The defeat means GB must win their final group game against Croatia on Sunday to stand a chance of a first ever appearance in the quarter-finals.

The teams were level with seven minutes remaining, but Belarus hit a 12-2 run to deliver a killer punch.

The defeat, GB's third in a row, means they have to beat Croatia in their final group game on Sunday to stand a chance of reaching the quarter-finals in France, but that would still not be enough if Serbia have beaten the Czech Republic earlier the same day.

Great Britain led early on, 8-2 with a three-pointer from Leedham, but Belarus replied with an 11-0 run to remind GB coach Damian Jennings that his team were in for a tough afternoon.

Trailing 34-28 at half-time, GB re-took the lead with four minutes and 12 seconds remaining in the third quarter with a Lauren Thomas-Johnson lay-up and led 46-43 at the start of the fourth quarter.

Tied 49-49 with 7:06 remaining on the clock, Belarus had threes from Katsiaryna Snitsyna and Anastasiya Verameyenka in their 12-2 run.