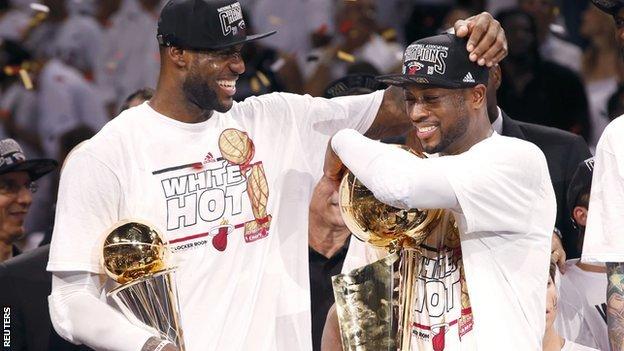 Miami Heat beat San Antonio Spurs 95-88 in the deciding match of a dramatic series to retain the NBA title.

San Antonio were seconds away from clinching the championship on Tuesday before Miami fought back to win in overtime and force a decider.

With the series tied at 3-3, LeBron James scored 37 points to earn Miami the third title in their history.

The 28-year-old was named the most valuable player for the second successive season.

"To be able to come onto our floor and do it, it's the ultimate," said James, who had faced questions about his performances in key matches.

"I can't worry about what everybody says about me. I am LeBron James from Akron, Ohio, from the inner city. I'm not even supposed to be here. I'm blessed."

The Spurs began strongly, taking a seven-point lead in the first quarter, though that was down to three by the latter stages of the third and they could not hold on.

"It's no fun to lose, but we lost to a better team," he said. "You can live with that as long as you've given your best. And I think we have."

NBA commissioner David Stern described the series as a "championship for the ages" which had "captivated a global audience".