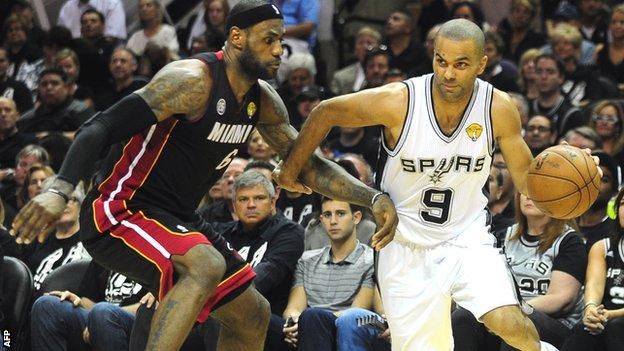 The San Antonio Spurs are expected to come out shooting against LeBron James' Miami Heat as they seek the win that will give them this year's NBA title.

The Spurs lead 3-2 against the Heat in the best-of-seven series with both remaining games scheduled in Miami.

San Antonio, led by France guard Tony Parker, have the Finals' star man in Danny Green, who has scored a record 25 three-pointers in the series so far.

LeBron James' sporting reputation hangs in the balance. Ten years after being drafted, Miami's All-Star - tipped for more than a decade as the next Michael Jordan - must win game six to stay in the series.

The self-proclaimed king came to Miami and promised multiple titles. So far, since joining the Heat in 2010, he's delivered just one. He could buy almost anything - he earns a reputed $59 million - but he can't buy a place in history as one of the sport's immortals. Not yet. That's what makes this series, this game, crucial.

Miami are looking to retain the title they won by beating Oklahoma City.

The Heat were thought to be unbeatable after assembling James, Dwyane Wade and Chris Bosh as the nucleus of their team in 2010.

Although they won the NBA title last season, they were defeated in the 2011 final series by the unfancied Dallas Mavericks.

They have found the experienced Spurs squad a difficult nut to crack in the Finals, despite being the favourites for the title.

San Antonio's nucleus of Parker, Argentine Manu Ginobili and Tim Duncan, none of them born in the US, has previously won the title in 2003, 2005 and 2007.