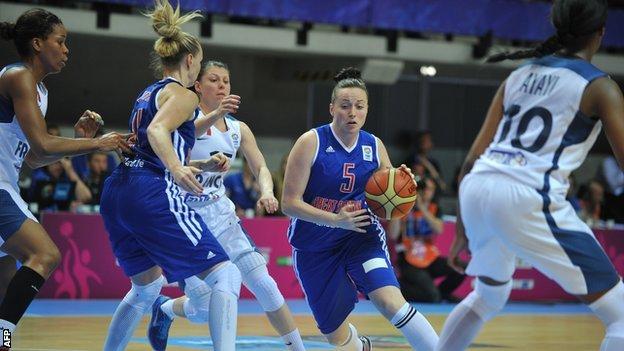 Great Britain's winning streak at the EuroBasket in France came to an abrupt end as they were defeated by the hosts 79-47 in Trelaze.

The British women had already progressed to the second round over the weekend, but were overpowered by the Olympic silver medallists.

"It was a tough one, but we expected that," GB's Stefanie Collins told BBC Sport.

I can't tell you how proud I am of the team after winning the opening two games and reaching the second round.

"We're confident we've got more to give in the second round though."

Despite the defeat, GB had already qualified for the second round after beating Serbia and Latvia last weekend. After a rest day, GB will return to face the Czech Republic on Wednesday.

They will then play Belarus who impressed en route to finishing top of Group D, on Friday, before completing their second round fixtures against Croatia on Sunday.

With Great Britain's first-phase results against fellow-qualifiers France and Serbia also counting in the second round, one victory should be enough to see the GB team progress to the EuroBasket quarter-finals for the first time in their history.

Olympian Johannah Leedham, who only joined up with the team days before the EuroBasket after trials with US-based WNBA side The Connecticut Sun, was instrumental in Great Britain's best moments against France.

The 24-year-old forward scored a three-pointer with less than 20 seconds on the clock, but buoyed by the partisan support the French tormented the GB defence to lead 33-22 at half-time.

Leedham top-scored for GB with 13 points, three rebounds and two assists, with Lauren Thomas-Johnson also impressing, but they could not counter the threat of French players Isabelle Yacoubou and Valeriane Ayayi.

The pair ran in 22 points and nine rebounds between them as the hosts claimed a comfortable victory which maintained their 100% record in the competition.

"We were up against it in the pressure-pot that is this arena," admitted GB head coach Damian Jennings.

"I can't tell you how proud I am of the team after winning the opening two games and reaching the second round."

GB and France will be joined in the second round by Serbia, who defeated Latvia in the early match to finish third in the group.

The other half of the draw will feature Turkey, Montenegro, Slovakia, Spain, Italy and Sweden, but defending champions Russia were eliminated - by 0.00028 of a goal average point - despite beating Italy in their final group game.