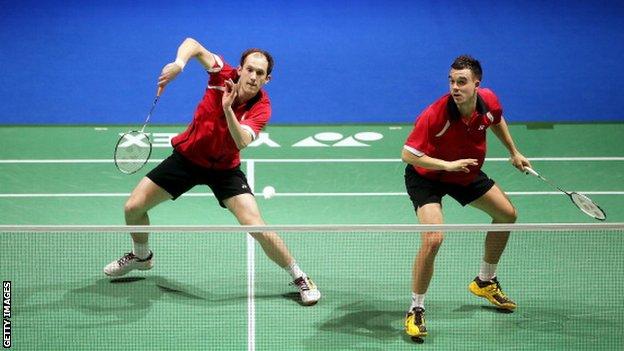 Mixed doubles pair Chris Adcock and Gabby White bowed out at the first-round stage of the All England Open after defeat by top seeds Xu Chen and Ma Jin of China.

I thought we had the game to beat those two

"They're the best in the world and they showed that - but we learnt a lot," said White, who is Adcock's fiancee.

Scotland's Robert Blair was the only British player to taste victory.

"I am very happy," said Blair. "We haven't played too much together, so to perform like that against a pair like that is very nice. It is good to come through a close match."

Adcock's men's doubles campaign with Andy Ellis ended in the first round.

The pair, ranked 23 in the world, were edged out 21-29 24-22 in a close match against Malaysian pair Koo Kien Keat and Tan Boon Heong at Birmingham's National Indoor Arena.

Adcock had high hopes before the match, especially after he and Ellis had beaten world number one duo Mathias Boe and Carsten Mogensen a fortnight ago.

"I thought we had the game to beat those two," said Adcock, after defeat by the second seeds. "We put ourselves in winning positions, especially in the second, and let it slip, which was very disappointing."

White was also beaten in the women's doubles, playing alongside 21-year-old Lauren Smith in a 21-16 21-7 defeat by Ma and Tang Jinhua,