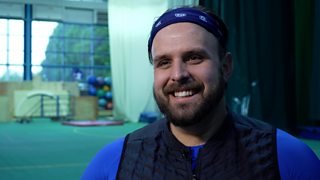 Ahead of the World Para-Athletics Championships, reigning champion Aled Sion Davies reveals the impact becoming a father has had on him.

Davies, 28, is chasing a fourth consecutive world title in the shot put in Dubai later this week.

But the Welshman says the birth of his daughter Phoebe in September is helping keep everything in perspective.

'We can convince Messi to stay'