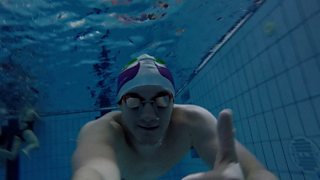 Boyle and Sheen back swimmer's campaign

Welsh para-swimmer Jack Thomas tells BBC Sport Wales he cannot believe the response to his fundraising campaign, which has been supported by some famous names.

The 22-year-old from Swansea almost quit the sport two years ago after suffering from injury and depression.

But after turning to the public for help, he has been overwhelmed with donations and has even been given money by comedian Frankie Boyle.

The S14 swimmer is now on track to compete at the 2018 Commonwealth Games - four years after he won a bronze medal at Glasgow.