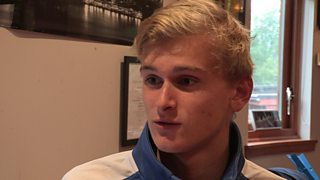 'Murray has shown me where end game is'

The Scottish National Tennis coach Colin Fleming says Hamish Stewart has all the qualities to succeed in the pro game. The 18 year old from Stirlingshire has had a remarkable summer, playing in Junior Wimbledon for the first time, before jetting to the Bahamas where he won the Commonwealth Youth Games for Team Scotland. The next chapter is about to begin with a sports scholarship to the United States - and as Stewart told Rhona McLeod, he's had a massive role model in another local boy.