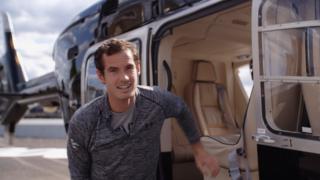 Andy Murray is joined by BBC Sport's Lee McKenzie as he surveys the London skyline.

The 2013 champion reveals there is a lot of 'pressure and stress' involved during Wimbledon fortnight, but on the flip side he enjoys staying at his own house and sleeping in his own bed.

The British number one, who was filming at Canary Wharf, gets his Wimbledon 2015 campaign under way today against world number 58 Mikhail Kukushkin of Kazakhstan.