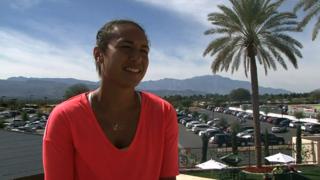 Britain's Heather Watson reflects on her victory over world number eight Agnieszka Radwanska in Indian Wells, her first win over a top 10 player.

She will play Spanish 12th seed Carla Suarez Navarro in round four.

Odogwu and Randall called up by England