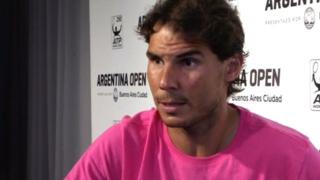 Rafael Nadal says tennis "must protect" tournaments played on clay due to the number of injuries suffered by players on hard courts.

The 14-time Grand Slam champion was speaking after claiming a record-equalling 46th career clay-court title with a 6-4 6-1 victory over home favourite Juan Monaco in the Argentina Open in Buenos Aires.

The Spanish world number three moved on to the same number of titles as Monaco's compatriot Guillermo Vilas.