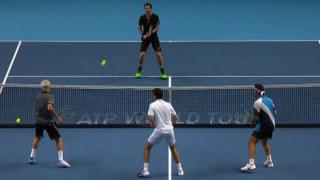 Britain's Andy Murray lines up against the combined might of Pat Cash, John McEnroe and Tim Henman as they entertain the crowd at the 02 in London.

Injury to world number two Roger Federer meant that he could not face champion Novak Djokovic in the scheduled final.

Andy Murray stepped in to play a 'pro' set - the first to eight games - against the Serb, before entertaining the crowd with the tennis legends.