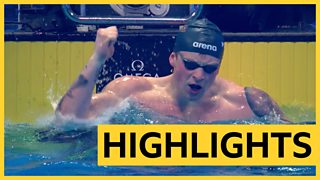 Britain's Adam Peaty broke the 100m breaststroke short course world record for the first time with a time of 55.49 seconds in the International Swimming League.

The previous record of 55.61 was set by South African Cameron van der Burgh in 2009.

Peaty, who also set a British record of 25.48 in the 50m breaststroke during the 'skins' event, helped London Roar finish second in the ISL semi-finals and qualify for next week's Grand Finale.

The Olympic champion holds the world record times in the 50m and 100m long course events, which take place in 50m pools, but has traditionally struggled in the 25m short course competitions as they draw on skills such as dives, underwater work and turns as well as swimming.

"It's all a learning process and it's not my best swim. I know it's a world record, but I can go faster," Peaty said.