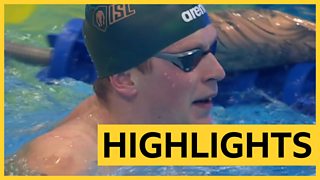 'That wasn't breaststroke, he was flying!' Peaty mounts comeback to win

Adam Peaty mounts a late comeback to break his own British record and win the men's 50m breaststroke for London Roar on the first day of semi-finals of the International Swimming League in Budapest.

The standout performance of the first day of semi-final one belonged to London's Kira Toussant, who set a new world record in the 50m backstroke.

The Dutch swimmer touched in 25.60 seconds to beat the previous mark of 25.67 set by Brazilian Etiene Medeiros in 2014.