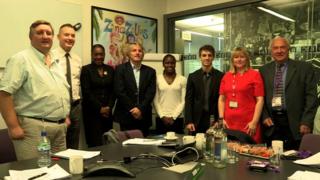 An expert panel has chosen the winner of the 2013 BBC Sports Personality of the Year Unsung Hero.

The decision of the panel, which included boxer Nicola Adams and gymnast Max Whitlock, will be announced during Sunday night's award show.

This year marks the 60th edition of the programme and will be held at the First Direct Arena in Leeds (Adams's home city) in front of an estimated 12,000 capacity crowd.

Celebrating its 10th anniversary in 2013, the Unsung Hero award recognises remarkable achievements of people from across the UK, with the overall winner chosen from 15 Unsung Heroes from the BBC's nations and regions.

There is a continuing need for more unsung heroes in sport. If you have been inspired and want to get involved in helping grassroots sport in your community and developing the champions of the future, there's lots of information on our Get Inspired pages.

Public voting for the 2013 Sports Personality will take place by phone and online during Sunday's live show, which is broadcast on BBC One from 19:40 GMT.

EFL: Sunderland beat Ipswich in League One after Watford draw to go second in Championship and Bristol City win