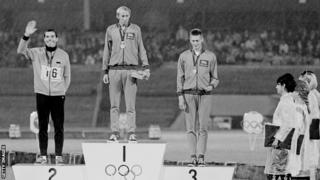 Hemery hurdles to victory in 1968

In 1968, hurdler David Hemery was named Sports Personality of the Year.

Hemery won the 400m hurdles at that year's Olympic Games in Mexico, setting a world record time of 48.12 seconds.

He was elected as the first president of UK Athletics in 1998.