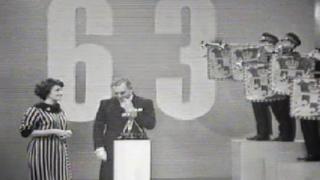 Hyman sprints to success in 1963

In 1963, Dorothy Hyman was named Sportsview Personality of the Year.

This award recognised her incredible achievements of the previous year, where she walked away from the Commonwealth Games with two golds and a silver medal in sprinting events.

Add to this her gold in the 100m at the European Championships and it is easy to see why Hyman will forever be regarded as one of Britain's greatest female sprinters.