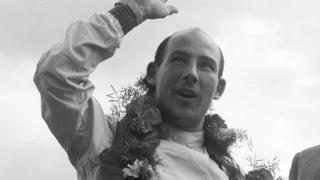 In 1961, racing driver Sir Stirling Moss - who has died at the age of 90 - was named Sportsview Personality of the Year winner for his outstanding contribution to Formula 1.

Moss finished the 1961 season second in the World Championship despite a great win in the German Grand Prix.

Four times runner-up in the Formula 1 drivers' championship, Moss effectively retired in 1962 after a near-fatal crash in the Glover Trophy at Goodwood.

He continued to race in historic cars and legends events, but eventually retired at the age of 81 after a career that spanned eight decades and took in 212 victories.