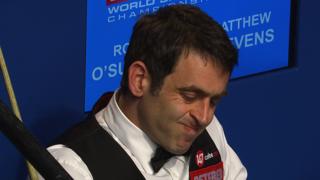 O'Sullivan nearly snaps cue in half

Ronnie O'Sullivan nearly snaps his cue in half after hitting it on the table in frustration during his second-round match against Matthew Stevens at the World Championship.

After missing an easy red O'Sullivan banged his cue hard on the table, with the slow-motion replay showing how much it bent.

The five-time champion ended the first session 5-3 up in the best-of-25 match.

From tennis outcast to trans pioneer