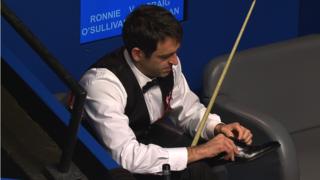 O'Sullivan plays with no shoes

Ronnie O'Sullivan is forced to briefly play in his socks during his first round match against Craig Steadman at the World Snooker Championship at the Crucible Theatre in Sheffield.

The five-time champion was forced to change his shoes midway through the match, and even appealed to the crowd for a pair of size eights before eventually having to borrow tournament director Mike Ganley's footwear.

playing in his socks.