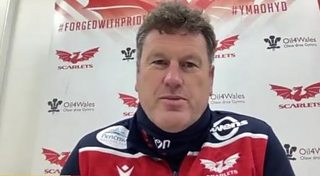 Scarlets head coach Glenn Delaney says Liam Williams accepts that he took "a step too far" when he was sent off in the Pro14 derby defeat by Cardiff Blues.

The British and Irish Lions back was sent off for his dangerous entry into a ruck.

Williams will miss Wales' opening Six Nations game after being given a three-match ban.