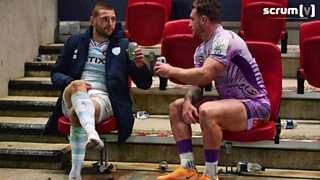 Russell best 10 in world on his day - Hogg

Scotland captain Stuart Hogg is looking forward to linking up again with "genius" fly-half Finn Russell, who he rates on his day as one of the the best 10s in the world.

Hogg's Exeter side defeated Russell's Racing 92 in the recent Champions Cup final, with pictures of the pair and fellow Scotland international Jonny Gray sharing a beer after the game.

Now after the fly-half missed the start of the Six Nations earlier in the year, Russell and Hogg are back in the Scotland camp with Gregor Townsend's side facing Wales on 31 October in the delayed tournament finale.