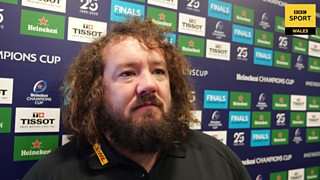 The Harlequins scrum coach credits the New Zealander with changing his career and says the 12 years under Gatland were as good, if not better, than the golden era of the 1970s.

Jones was substituted by Gatland after 32 minutes in his final - and 95th - appearance for Wales, but says "he changed my career, I owe him a lot".