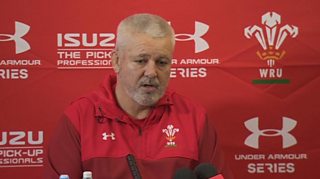 Gatland may not risk Halfpenny for Springboks

Warren Gatland says he will consider not risking Leigh Halfpenny against South Africa on 24 November even if the full-back recovers from the head injury he suffered against Australia.

Halfpenny is going through the concussion protocols after coming off against the Wallabies where he was the victim of a controversial challenge from Samu Kerevi.

Gatland insisted Wales will take no chances with Halfpenny's health.