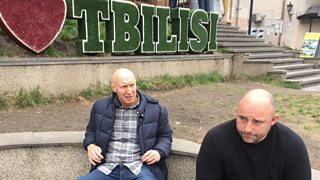 Flats and Shanks: A guide to Georgia

Flats and Shanks travelled to Georgia in 2017 to find more about the national rugby team before they ran Wales close in Cardiff that autumn.

The pair talked to the coaches and players of the team and even get a chance to discuss the match with the Georgian Prime Minister, Giorgi Kvirikashvili.

They also appeared live on Georgian television, where Shanks showed off his wrestling and dancing skills.