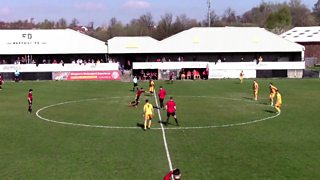 Maryhill midfielder Gavin Stokes scored what is one of the fastest goals in world football when he netted from the kick-off against Clydebank.

Stokes' drive from the halfway line took 3.2 seconds to fly past the Clydebank goalkeeper in Saturday's 3-0 win in the West of Scotland Super League First Division, part of the Scottish semi-professional junior football set-up.

Saudi Arabia midfielder Nawaf Al Abed is said to have scored in two seconds for Al Hilal against Al Shoalah in 2010, but the time was not officially recorded.

Meanwhile, English striker Marc Burrows was reportedly aided by a strong wind as he scored in 2.56 seconds for Cowes Sports Reserves against their Eastleigh counterparts in 2004.

Kris Boyd became the fastest goalscorer in Scottish Premier League/Premiership history in January when he scored for Kilmarnock against Ross County 10 seconds after kick-off.

West Ham a 'special place to be' - Rice

Havertz 'stepped up' for Chelsea - Tuchel

New CL format could be agreed this month