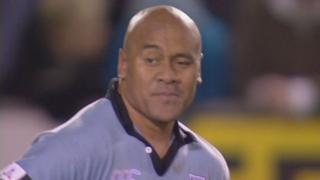 In 2005 the then 30-year-old signed for Cardiff Blues on a seven-month contract.

The 6ft 5in, nearly 19 stone winger had been diagnosed with nephrotic syndrome in 1996, the rare and serious kidney condition that saw him step aside from Test rugby in 2002 and undergo a kidney transplant in 2004.

With Lomu targeting regaining an All Blacks place for the 2007 World Cup in France, the inclusion of Cardiff on his comeback trail caused quite a stir.

He made his debut for the Welsh region on 10 December 2005 in a Heineken Cup match away to Calvisano in Italy.

Lomu was understandably not at his peak and his first and only Blues try came the day after Boxing Day that year, in a 41-23 Celtic League win over Welsh rivals Newport Gwent Dragons at Cardiff Arms Park.

BBC Wales Sport brings you that bit of Lomu history from the archives.