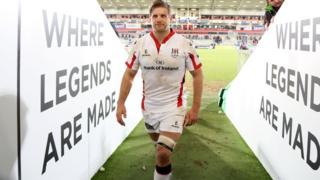 Ulster's Chris Henry admits to being "emotionally drained" after coming on as a second-half replacement during his side's 36-17 Pro12 win over Cardiff Blues.

The Ireland flanker received a rapturous reception when he was introduced on his return to action at Kingspan Stadium after been sidelined for much of the season after a mini stroke and heart surgery.

"I was very, very nervous but the noise was amazing. It's something I'll never forget," said Henry.