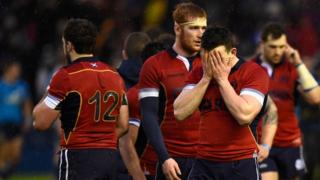 Scotland slip to a third successive Six Nations defeat after a last-gasp penalty try seals a 22-19 victory for Italy at Murrayfield.

Mark Bennett ran in his first international try for the Scots before Joshua Furno and Giovanbattista Venditti replied for the Italians.

Greig Laidlaw's 14 points with the boot kept the hosts in front until the final minute, but Vern Cotter's side were undone by a last-gasp penalty try, which was converted by Tommaso Allan.