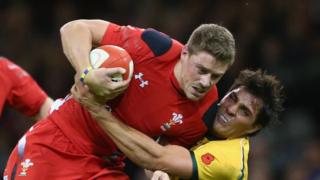 Wales coach Warren Gatland says he was surprised by Rhys Priestland's decision to join Bath from Scarlets after the 2015 World Cup.

Priestland is one of three fly-halves selected in Wales' squad for the Six Nations, with Ospreys' Dan Biggar and Cardiff Blues' Gareth Anscombe also included.

‘It’s a rubbish law’ - Why was Man City's controversial goal allowed to stand?