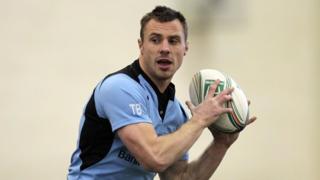 Tommy Bowe says he will return to action in four or five weeks after injury but Ulster's Heineken Cup clash against Saracens on 6 April is likely to come too early for him.

"The knee is coming along well. Hopefully, I'll be back within the next four or five weeks," said Bowe.

"I'm 12 weeks post operation at this stage and it's meant to be a 16-week recovery period."

The extraordinary rise and fall of Gordon Elliott