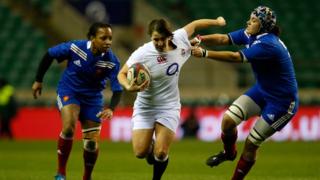 England trailed as early as the fifth minute when France's Elodie Guiglion touched down in the left corner, before Kay Wilson briefly put England ahead. But the visitors took control with four unanswered tries.

Hannah Gallagher scored a late try for England, however France saw the game out to condemn England to their first Twickenham loss in 10 matches.