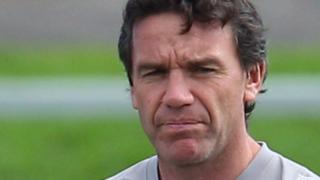 Defence coach Mike Ford admits England missed a "golden opportunity" to progress in the World Cup following their 19-12 defeat by France in the quarter-final in New Zealand.

Ford says defensive lapses in the first half were responsible for England's exit from the tournament but insists that manager Martin Johnson is the right man to continue leading the squad.

In Saturday's other quarter-final Wales beat Ireland 22-10 in Wellington, and now face France in the last four.

Arrests made at Spanish giants Barcelona