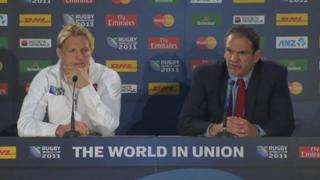 Head coach Martin Johnson and captain Lewis Moody praised the improved discipline in England's 67-3 win over Romania and look forward to a "big week" which culminates in their clash with Scotland.

If Scotland beat Argentina on Sunday, the Scots and England will both qualify, with the winner of their meeting next Saturday topping the pool.