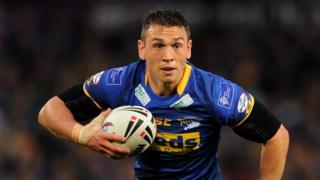 Leeds Rhinos captain Kevin Sinfield will retire from rugby league and join Championship rugby union side Yorkshire Carnegie at the end of the 2015 season.

The 34-year-old former England captain has agreed an 18-month contract with Bryan Redpath's side.

Sinfield says he is excited by the opportunity and feels that he leaves the Rhinos in good shape for the future.