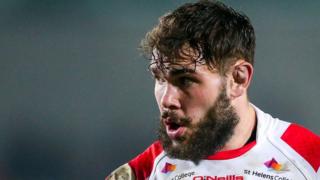 The 24-year-old front-rower's performances have set the platform for Saints under Nathan Brown and now Keiron Cunningham, and his efforts against Warrington were enough to impress fellow prop Jamie Peacock and Wires coach Tony Smith.

Walmsley, who moved to Super League from Championship side Batley in 2013, has a league winners ring already in his collection after last season's Grand Final win against Wigan - and Peacock has tipped the Dewsbury-born forward to make the step up to international level this term.

You can see every try from every round on the BBC's Super League Show, which is available on the BBC iPlayer.