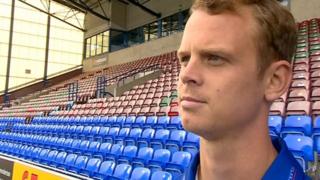 Widnes stand-off Kevin Brown tells BBC Sport that both the Vikings and Castleford are likely to experience nerves in their Challenge Cup semi-final on Sunday.

The Vikings have not reached the final of the competition since 1993, while it is 22 years since Castleford appeared at Wembley.

Former Huddersfield captain Brown also says he feels vindicated to have left the Giants and joined Widnes at the start of 2013, at a time when they were struggling in Super League.