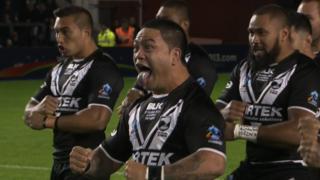 Watch the teams from New Zealand and Samoa face-off in a stirring war cry battle before their opening game in the Rugby League World Cup.

The Kiwis opened the exchange with a new Haka cry and the Samoan team responded with their own war dance called the Siva Tau.

Current holders New Zealand went on to the win the match and begin the defence of their World Cup crown with a victory.