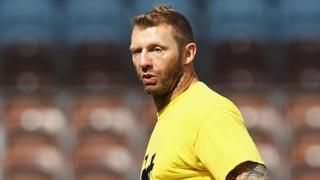 Assistant coach Sean Long tells BBC Radio Manchester that the players and staff at Salford City Reds are "frustrated and upset" by the lack of communication about the club's financial situation.

A rescue plan, which potentially could have seen the Super League side loaned £1.5m by Salford City Council and Peel Holdings, was rejected on Tuesday, leaving the future of the club uncertain.