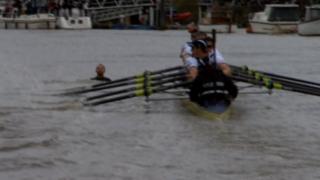 Cambridge win the 158th Boat Race in April after a swimmer in the River Thames forces a restart and Oxford break an oar in a clash moments after the resumption.

The Oxford and Cambridge boats were side by side after eight minutes when the sight of a man - who received a six-month prison term for disrupting the race - in the river ahead of them forced them to stop. The race was restarted at Chiswick Bridge.

The last time the race had to be restarted was in 2001 when there was a clash of blades.