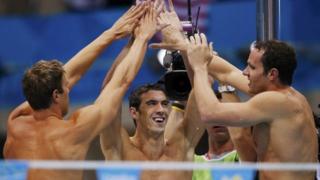 Michael Phelps, the greatest ever Olympian, ends his career with 18 gold medals after he and his team-mates win

It was Phelps's last ever swim and so ends a glittering career in which he has won 18 golds, two silvers and two bronzes to add to his 26 World Championship golds, six silvers and a bronze, 44 golds in total.

Japan took the silver with the bronze going to Australia.