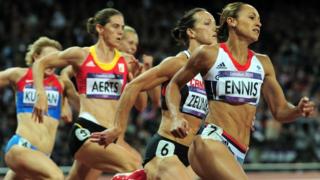 Jessica Ennis leads the heptathlon at the London 2012 Olympics after four events having set a new British record for the 100m hurdles, and run a personal best in 200m.

Ennis threw the ninth longest distance of 14.28m in the shot put, and cleared 1.86m in the high jump.

The four results mean Ennis will go into day two of the heptathlon with a lead of 184 points over Austra Skujyte, 255 over Jessica Zelinka and 309 over world champion Tatyana Chernova who is ninth.