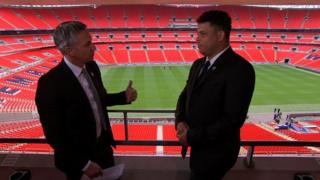 Ronaldo also discusses why he thinks Messi is such a good player and admits to being impressed by the Argentine's close-control dribbling.

The Brazilian also talks about the importance of the Olympic football tournament on his career, having played in Atlanta in 1996, the famous reception he received after a Champions League hat-trick at Old Trafford and the ongoing preparation for the World Cup in Brazil in 2014.